My visit to Necker Island


I can't remember the last time I have written so much.  This vacation has been so inspiring and filled with great experiences and adventures.  One of the most amazing things was our visit to Necker Island.  Necker Island is Richard Branson's (of Virgin Records, Virgin Mobile, Virgin Airlines) private island located here in the British Virgin Islands.  For years he lived on the island, he raised his kids there and evnetually made it is into a place where people could visit and stay.  We did not stay there, but were fortunate enough to visit.  Click here to see a you tube video of Necker Island with Richard Branson.

Necker is and island, of course, so the only way to get there is by boat or helicopter.  We were taken to the the island in a glass bottom boat that is owned by a young guy named Gumption.  Gumption told us the story of Richard helping him to start his business, Sea it Clear, glass bottom boat rides and tours, which included allowing Gumption to bring people to the island in his boat and give tours. Gumption is the only person who is allowed to do this.  He is knowledgable, generous, kind and a great tour guide.  He spent a lot of time with us, showing us the island, the animals and telling us about his different causes including sea turtle conservation.


The island is like nothing I have ever seen or experienced.  The beaches, the water, the animals and the amazing surroundings was breathtaking and overwhelming.  It is quite difficult to put into words which is one reason why I took so many pictures.  Since words really can't describe, I am going to allow the photos to do the talking.  Interestingly, the only waiver we signed was one saying that we would not post photos of other people or share posts saying we saw so and so there, but nothing about the animals, risks, etc.  So very different from the United States!

The highlight of going to visit this paradise for me, of course, was the animals.  Several different types of lemurs, parrots, flamingos, tortoises, lizards and lots of lots of doves.  Anytime I visit or see animals in captivity, there is always a possibility that I won't be comfortable with the setups or enclosures for the animals.  I was actually really impressed with the and happy with the amount of space, natural enrichment and a natural environment they are provided with.  The tortoises were loose and free to roam, as are the many large iguanas.  His goal here is conservation and many of hte lemurs are successfully breeding on Necker.  We even saw a mother with her baby holding on while she moved around.

I have worked with lemurs before, both the Ring Tailed Lemurs and the Blue-eyed Black Lemurs when I volunteered at the Oakland Zoo.  However, getting the opportunity to be close to animals like this is not something that is easy to come by in the U.S.  It is a rare opportunity and the times I have been around wild or captive animals was not like this.  We were taken into the actual enclosures where the lemurs live.  They were wandering all around us, climbing on us, inquisitive and interactive, clearly very comfortable with people!  We were allowed to meet, interact with and basically hang out with several different types of lemurs in different enclosures.


In addition to the lemurs, there are a lot of other animals on Necker Island as well.  One of my favorites to see was the large Aldabra Tortoises.  I have worked with this species in the past and in fact, when I was a little kid we would ride the same ones around at the zoo that I later got to participate in training with.

Necker Island also has several flamingos.  The flock of flamingos are standoffish, but we were allowed to watch them be fed and observe them in their environment.


We had the pleasure of meeting a blind flamingo named Lucky.  This bird cannot see so she is kept separate from the large group of flamingos and has a separate enclosure.  She is indeed lucky that this is where she ended up.

Another cool species of bird that we got to see is called the Scarlet Ibis.


There were even MORE animals!  Here are a few others that we got to see.

On our way back to Virgin Gorda from Necker Island, we stopped at Saba Rock, a restaurant and small resort to have lunch.  We also stayed to watch the "tarpon feeding".  They have groups of HUGE tarpon fish that come there to be fed scraps from the restaurant.  I was lucky enough to get the opportunity to feed them as well!

Getting to visit Necker Island was an amazing opportunity.  I highly recommend this experience to anyone who may get the chance to see it.

Posted by Vicki Ronchette at 12:30 PM 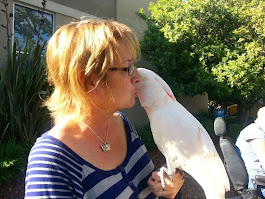